I live in Los Angeles, city of transplants.  Not heart transplants or face transplants, but whole people transplants.  Somehow I managed to marry a local, but everyone else I know out here seems to hail from somewhere else.  As such, we all root for teams that are way out-of-market, and watching out-of-market games isn’t cheap.

As of this writing, DirecTV’s NFL Sunday Ticket package costs at least $240 ($330 for the version that includes web & mobile access).  Adding the MLB Extra Innings package costs $200, same as the NBA’s League Pass.  If you’ve got the money to spend and really think you’ll wind up watching a high percentage of games, they can be worth it.  For most people, though, they are overkill.

Another option — a Slingbox.  In theory, a single Slingbox can solve all your out-of-market challenges.  Just hook it up to a cable box in your hometown, and wherever you are in the world, you can watch all the local coverage of your favorite teams.  In practice, though, it’s not an ideal solution.  The boxes themselves run from $180 to $300, and — chances are — you’ll need the more expensive option because the cheaper model doesn’t include wifi (i.e. it needs to be physically situated not just near a cable box, but also your home’s internet router).  “Slinging” the content to mobile devices is easy (though the smartphone and tablet apps cost an additional $15 each), and watching on the web is free, but it’s difficult to get the high quality content to a TV set.  Whenever I use Airplay to mirror the iPad app to my living room TV, the video quality always takes a hit. Also: if you’re using Slingbox to watch a program remotely, then whoever is at home looking at that TV has to watch the same thing.  (And don’t forget, this is all contingent on you having family or a friend in your hometown willing to let you hijack their cable box at will.)

Really, I’m just happy watching my favorite teams the few times a season they show up on local TV.   As a Tampa Bay Rays fan, between the nationally televised games that ESPN, Fox, and the MLB network air, not to mention all the times the Rays play the LA Angels, I can easily watch well over a dozen games a year without having to spend any additional money.  For football, I can watch the Bucs at least 3 or 4 times a season the same way.  Hockey is tougher because my DirecTV package doesn’t include the NBC Sports channel, which has the rights to most of the games.  (Thank goodness Tampa doesn’t have a basketball team, as that’s one less sport to worry about.)

The hard part –> Knowing in advance when games will be airing locally.  Using a “keyword” search on a DVR (i.e. looking for any programs with the words “Tampa Bay Rays” or “Buccaneers”) is inexact.  You wind up getting a list that includes non-games, repeats of games, and lots of games on channels you don’t subscribe to.  Websites that specialize in channel listings weren’t much help either.  Ideally, I wanted a site that would email me whenever a channel I get shows a game with a team I want to watch.  Though many sites offered email reminders and customizable channel listings, I couldn’t find a site that offered both the way I need them.  I then turned to an app called IFTTT — which stands for “If This, Then That.”  It’s an amazing app that ties different services together in incredibly useful ways.  You can program it so if that anytime “A” happens in one app (or service), then “B” will automatically happen in another.  “If” a Rays game showed up on a local channel, “then” I wanted an email reminder and/or it to set my DVR.  This, too, turned out to be a dead end, thanks to inadequate TV listing apps and services.

Then, last night, I turned on my TV and I saw this message from DirecTV:

It’s a new update for DirecTV Genie users specifically to help them track their favorite teams. Sounds great, right?  Well… Let’s check it out.  I followed the above messages instructions and navigated over to Sports. 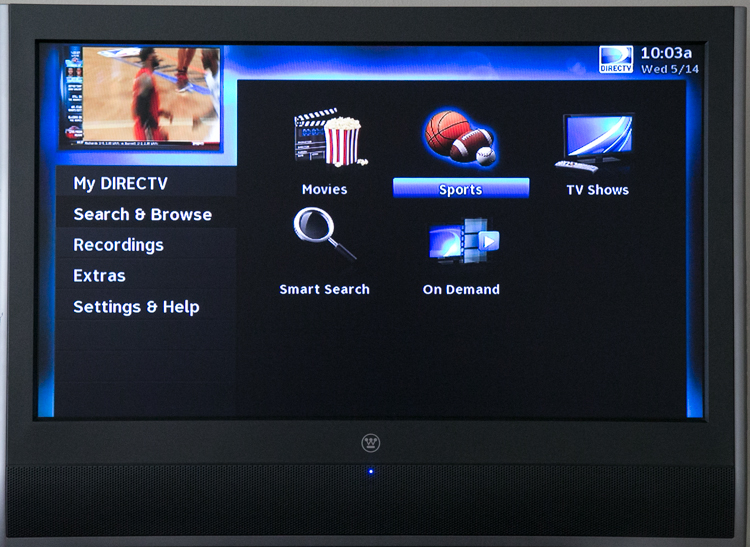 Once there, I navigated over to “My Teams” and added the Rays as a favorite. 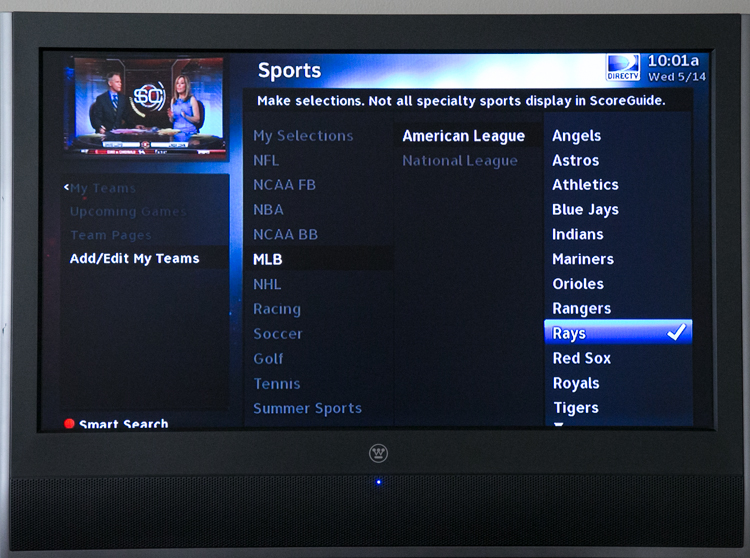 Then I selected the “Team Page” of the Rays. 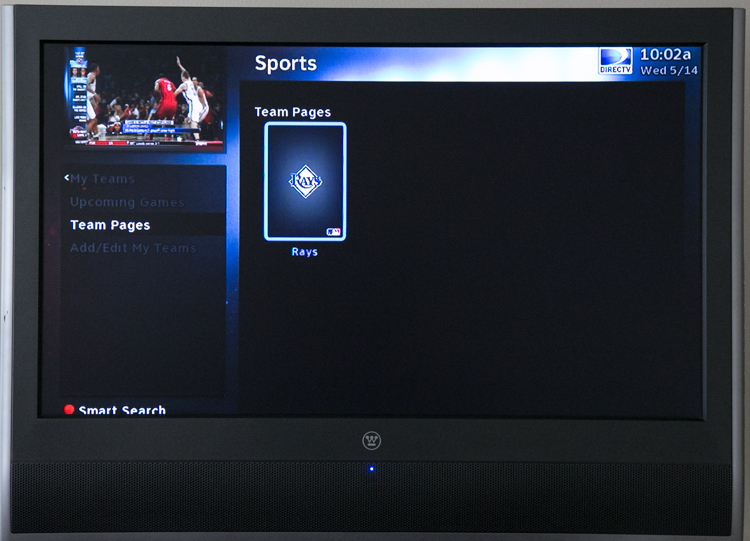 And from the Team Page, I was able to set recording options.  Note: Because of DirecTV’s obtuse menu system, this is so far taking twice as long as it should. 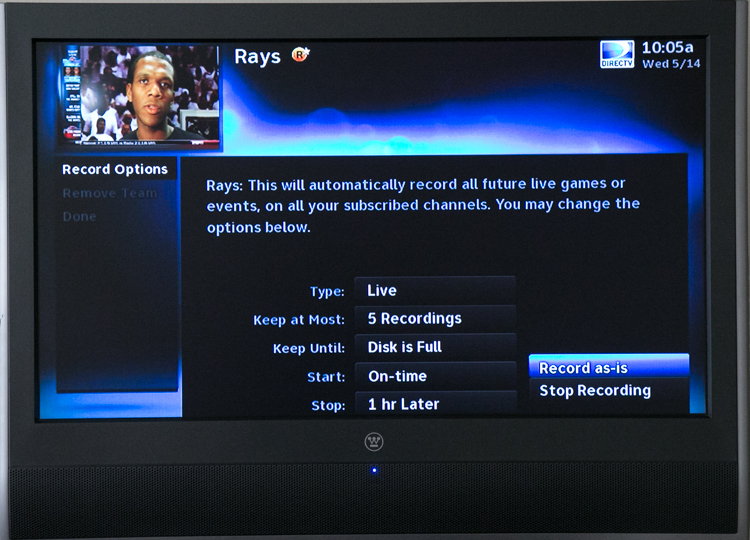 As you can see, it very clearly says it’ll record on my subscribed channels. Perfect.  I set it to automatically record the Rays whenever they show up on any channel I get (which should be soon, since the Rays play the Angels this weekend, and I definitely get that channel).  Now let’s navigate over to “upcoming games” and see what it plans to record… 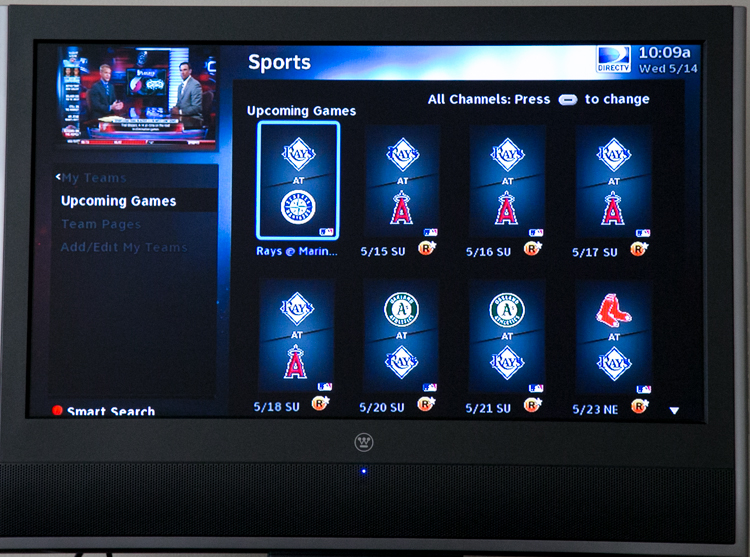 So much for this new “smart” search feature.  It’s just as dumb as ever.  If you subscribe to every channel, though, I suppose it’ll work as advertised, but if you don’t, it’ll just frustrate you with its wasted potential.

Back to a combination of Slingbox and manually checking the Rays upcoming schedule and matching it to local TV listings.  It’s not perfect, but it’s better than relying on DirecTV’s heinously flawed feature.

One thought on “DirecTV just rolled out a new feature for tracking your favorite sports team, but is it any good? (Not really.)”