Before I vent, let me say that I actually like Facebook.  It’s ubiquity makes it an ideal way for friends and family to stay connected.  Myspace was ugly, Friendster was never fully embraced, but Facebook fell into the sweet-spot that attracted both techies and their aunts.  The only catch is that whatever you post to Facebook is then going to be used to target advertising towards you.  Small price to pay, right?

I really don’t have a problem with the targeted ads part.  It’s the other potentially nefarious uses that bothered me.  Part of Facebook’s master plan (well, the master plan we know about, at least) is to claim all info/pics/videos/etc. you post to the site becomes their property, and they can exploit that content in any way they wish.   As a writer, such appropriation of other people’s work just feels wrong to me. (Edited to add: Yes, I know they aren’t claiming copyright, but they are claiming free, unlimited use from your personal intellectual property… which is worse. If they actually took the copyright, they’d have to compensate you. This way they don’t.)

So well over a year ago I decided to minimize my Facebook footprint.  I stopped uploading pictures, especially of my artwork.  I vowed not to post anything to the site that I might want to turn into a script or book (if “Shit My Dad Says” had originated on Facebook and not Twitter, you better believe Facebook would want a massive piece of the action).  And I also erased just about all the personal info from my profile.  Interests, favorite music, tv shows I liked, etc.  All gone.

Or so I thought.

Things that were  a little too interesting… 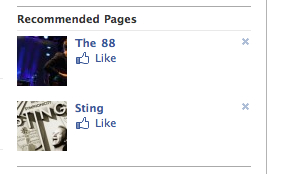 …because they were the very same music, tv shows, and movies that used to be on my profile.  Things I deleted a year ago.  Could it have just been a coincidence?  No.  A dozen times I signed in, only to see two more things once listed in my profile.  Things I intentionally deleted just so they wouldn’t be used this way.   Did they think I wouldn’t notice?  Or just that I wouldn’t care?

I knew Facebook had the ability to backlog every personal detail about your life, even the stuff you deleted.  I just didn’t think they’d ever flaunt that Big Brotherness so boldly.

Why let a silly thing like the wishes of your users stop you from doing whatever you want, whenever you want?