JANUARY 2019 UPDATE: Wow, I first wrote this post in 2015 after having quite a bit of difficulty buying a specific combination of watch/band back when Apple seemingly offered every possible combo available at time of purchase. Every combo except the one I wanted, that is. Three and a half years later, it’s still one of the most popular posts on this site. (Even more popular than my latest Tesla post!) Here’s the thing, though: Apple has now completely changed up how they offer the Apple Watch — fewer options at time of purchase. I suppose this is to help Apple simplify inventory tracking issues. My buying advice: If you really want a specific watch/band combo that isn’t offered as a default option, go to an Apple Store and ask a specialist if they can do a swap at time of purchase for the particular band you want. The way the newest Apple Watches are packaged, the band is in a separate box from the watch itself, so if you get a nice specialist on a good day, she may be able to accommodate your request, so you don’t feel like you have to buy an extra band. (Make sure to pick a band that’s the same price as the one that ships with the watch. Good luck!)

Okay, this post is for the Apple junkies out there.  If all you know about the Apple Watch is that it exists, this post probably isn’t for you.

So much has been said about the Apple Watch, I didn’t think I’d have anything new to offer by the time I got mine.  Well, I was wrong.  Apple offers a wide variety of watch sizes, colors, and band choices. But there’s one combination they really don’t want you buy, and I think I figured out know why.

The Apple Watch Sport (the least expensive model) comes in five flavors, seen above.  I have simple tastes.  I didn’t want anything too ostentatious.  A Sport with a black band was fine with me.  The problem:  The black band only comes with a “space grey” (read: black) Apple Watch Sport seen below.

In total, Apple offers ten Sport models to choose from online, but none of them pair the “silver aluminum” (read: “white-ish”) casing with a black band.

The black-on-black look is apparently very popular with early Apple Watch buyers, but it wasn’t for me.  This watch will probably one day be my wife’s, and she wouldn’t really go for that.  I told the Apple Watch specialist at my neighborhood Apple Store I wished I could get a white Sport with a black band and he told me about Apple’s official band replacement program. “No problem,” he said. “Once your watch arrives you can just swap out the band for a black one.”

Even though Apple offers free, unlimited in-store try-ons, they don’t have every combination available for you to see on your wrist (there are simply too many combinations).  Apple set up the program to alleviate buyer’s remorse if the band you ordered online didn’t look and feel the way you thought it would. The specialist said that was an option for me and I was more than happy to take advantage of it.

Yesterday my watch arrived. White face with a white band.  My first thought was that it was actually pretty striking, even though it was the most basic model available.  But I had my heart set on the black strap, so to the Apple Store I went.  I told them I wanted to swap out the white band for a black one.  I was their first in-store band swap, and they were happy to make it happen.  The specialist went to the back, got the new band, then started processing the transaction on her handheld device.

But there was a problem.  She got a weird error message.  She went to retrieve to a manager.

The manager then told me he’d try to get the swap to go through.

But he couldn’t get it to work, either.

The problem:  Turns out the black band isn’t in the same “class” as the other bands that come with the Sport models.

A little more investigation revealed this isn’t a glitch.  It’s very intentional.  The fine print in Apple’s band swapping program is that you’re limited to only swapping for other bands that you could’ve bought at the time of purchase.  A black band wasn’t an option for my white Sport watch at my time of purchase, therefore it’s not eligible.

Here’s where it gets interesting, though:  If you ordered the more expensive stainless steel Apple Watch (non-sport model), which is available to order with either a white or black sport band, you could swap a white for a black one, no problem.

If you buy the stainless steel Apple Watch, the white and black sport bands are in the same class.

But if you ordered the Sport model, all of a sudden, those same two bands are now in a different class.

So if you really want a black band for your white Apple Watch Sport, your only choice is to pony up $50 to get one as an additional accessory.

The only possible explanation for this is that Apple really prefer owners of the silver aluminum Sport watch to not use it with a black sport band. But why?

Well, I paid the additional $50 for the sporty black band.  Here it is below on my silver aluminum Sport model. (FYI: Individual bands only went on sale in Apple retail stores within the last couple weeks.  For all I know, since Apple doesn’t make easy to get this combination, this is the first such pairing.) 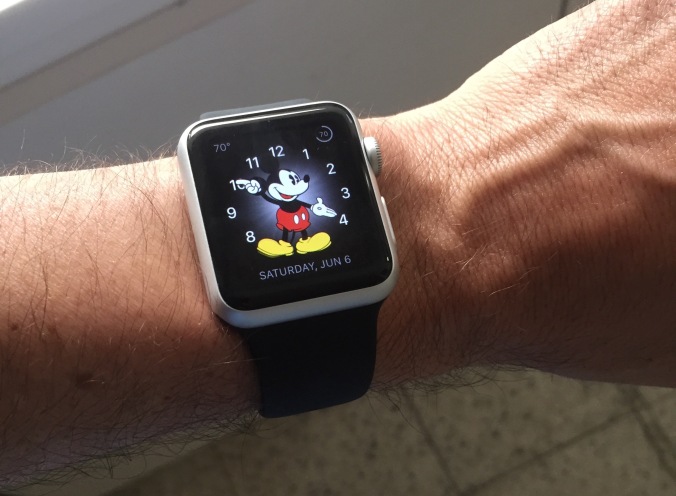 And you know what? I actually found myself preferring the white band that originally came with the watch.  You can’t tell from the photos, but the black band on the silver aluminum watch has a very ’80s Casio vibe.  The issue isn’t too much black, since the Space Grey sport watch looks really good with the black band.  The issue is that there isn’t enough silver aluminum. It’s just boring to look at, especially with the screen off (which it will be 95% of the time).

The silver aluminum casing with the black sport band looks a bit cheap in person, especially compared to all the other options Apple offers. It has a very “plastic-y” feel to it. I think that’s why Apple offers the space grey Sport model and only pairs it with the black band.  Space Grey/Black is a more interesting combination Silver Aluminum/Black.

As for the white band that came with my white Sport watch, it was far less ostentatious than I was expecting.  I wound up returning the black band and keeping the white one — and doing so gladly.

So why doesn’t Apple want you to get a white Apple Watch Sport with a black band?

One possible answer:  Because they think it’ll be a popular option and want to get an addition $50 out of many users.

But the more likely answer: Because it’s just not that pretty.

If you’ve got a better explanation, I’m all ears.

Either way, it’s pretty clear Apple has made an official decision to discourage that combo’s availability at launch.

ps – if you got here from Reddit, thanks for reading this far!  But please be kind… this is all in good fun!

10 thoughts on “The Apple Watch Sport band conundrum: Why doesn’t Apple want you to pair a white watch with a black band?”