There are a lot of podcast apps from which to choose.  I’ve given the full versions of Apple’s default player, Overcast, Downcast, iCatcher!, and Pocket Casts all a try, and they all have their plusses and minuses.  Here’s who I think should be using each…

END_OF_DOCUMENT_TOKEN_TO_BE_REPLACED

Speaking of podcasts, let’s say you’ve gotten a brand new podcast-playing app for your iOS or Android device.  If only there were an easy way to get the new app to know what podcasts you were already subscribed to…  Wait, there is!  If you’ve been using a third-party podcast app like Pocket Casts, Instacast, Downcast, etc., there’s a good chance it’ll allow you export all your current subscriptions into a single file you can then import into your new app.  (Note: Apple’s default Podcasts app, sadly, does not allow this.)

Look in the settings of your current/old app for the option to “export to OPML.”  (If you must know, OPML is a file format that works well with RSS feeds, which are the heart of podcast subscriptions… but don’t worry about the specifics, you won’t be tested on this.)

In Pocket Casts, for example, the option can be found in SETTINGS > SYNC & BACKUP > EXPORT.  The Export window looks like this: 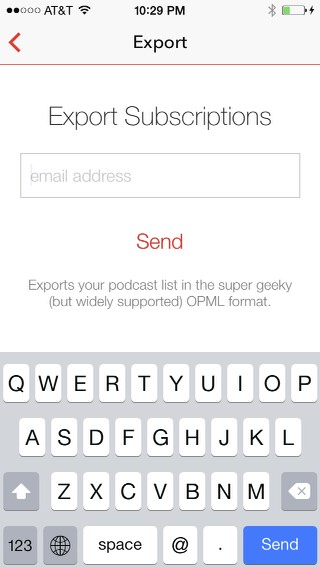 Just enter an email address you can check on your iPhone or iPad, and it’ll send the OPML file as an attachment to that address.  Open the message on your device, click on the attachment, and then use the “send to” feature (the little box with an arrow pointing up) to send the list to your new podcasting app.  On an android device, you might need to first save the file to your phone’s internal storage, then open it in the new app.

Downcast for iOS makes things a little easier.  Click on the “More” button at the bottom of the home screen, then click on “Tools.”  Select “Export Feeds to OPML” and you’ll see the option to send the file directly to a different application, no email required (unless you really want to use email). 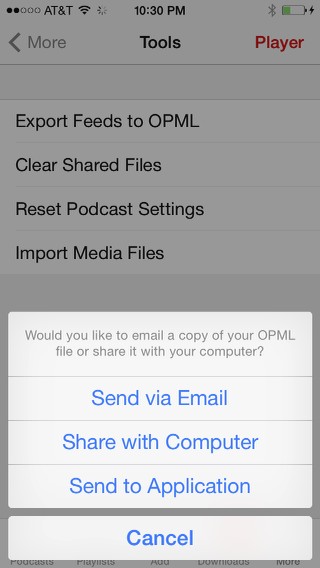 Overcast makes things even simpler.  In Settings, click on “Export OPML” and a list of compatible apps will automatically come up. 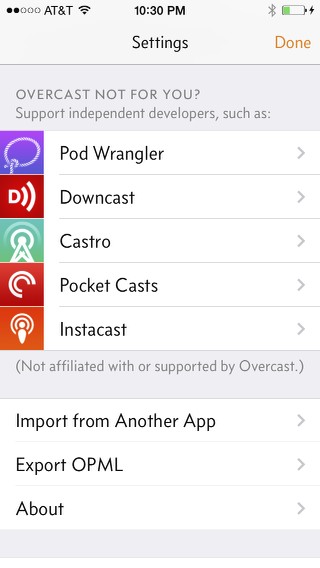 Pretty cool how Overcast will even recommend other apps you might like if Overcast isn’t your deal. (And I’m guessing all those apps use OPML.)

If you’ve been using iTunes to subscribe to Podcasts, you’re in luck.  Control-click on the “Podcasts” item in your sidebar (if the sidebar isn’t visible, you can unhide it from the View menu), and an “Export” button will appear.  Select OPML as your file format and email it to your device. 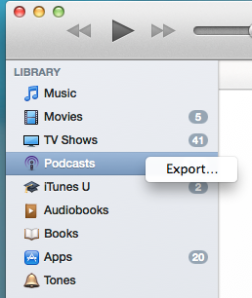 A cursory internet search reveals that a lot of popular podcast apps support OPML, so if you’re switching apps and you’ve got A LOT of subscriptions to re-subscribe to, do take advantage of this convenience.  Note:  This method will inform the new program what podcasts you’ve been subscribed to, but it won’t transfer other metadata, like which episodes you’ve already listened to/downloaded.

And if you’re really, really curious what exactly an OPML file looks like when you open it, here it is: 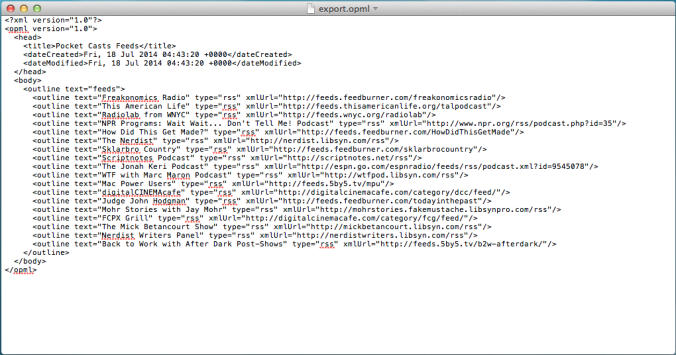 See, I told you it wasn’t that interesting.

Long-time readers of this blog (hi, mom!) know my affinity for podcasts.  I’ve offered advice to aspiring podcasters. I even returned my first Android phone largely because I didn’t like how that platform handled podcasts (in 2010).  So when Apple came out with their own dedicated Podcast app over a year ago, I was ecstatic.  Though version 1.0 was full of bugs, it offered one feature that made it worthwhile: A single playlist that automatically showed all my downloaded & unplayed podcasts, ordered from oldest to newest.  That’s all I really needed.

And then Apple updated their Podcast app.  The bugs largely went away… but so did the one function I actually used.

The new “unplayed” list now showed all the unplayed episodes of all the podcasts I subscribed to, whether they had been downloaded or not. Here’s the thing: If I haven’t downloaded a podcast episode, that means I don’t want to listen to it. (I have zero interest in streaming podcasts while I’m out and about.) I kept waiting for a revision that would restore the ability to automatically hide undownloaded episodes, but, alas, that day would never come.

After a year of manually managing my podcast library, I decided to finally break Tech Guy Rule #121: “Never pay for an app when a decent alternative is free.” I emptied my piggy bank and scrounged up enough coins to buy a new podcast app. But which one? Downcast, Instacast, Pocket Casts and iCatcher all had good write-ups on the web, as well as largely positive reviews on the app store.  They all cost less than five bucks.  They all bragged about their customizability.  But only one had this on its app store page:

And that app was Pocket Casts, which I immediately bought.  Here’s what the app looks like once you get it up and running: 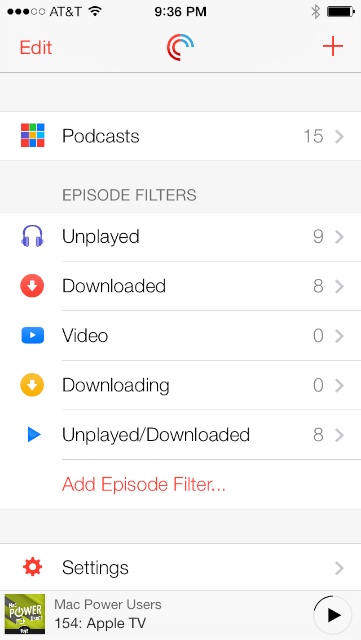 Above is the app’s home screen, where you’ll find a bevy of filters and lists you can customize to organize your library. 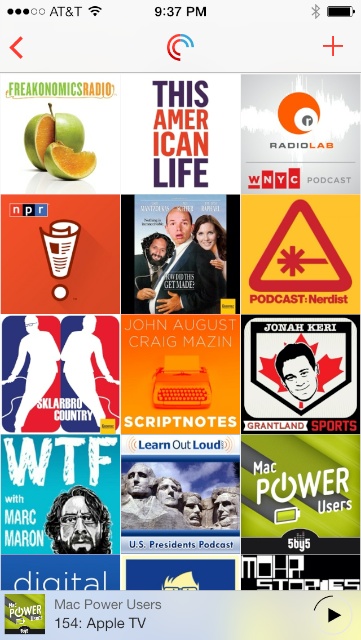 This is what the app looks like after you’ve subscribed to some podcasts.

Subscribing to podcasts is very easy. As soon as you hit the “+” in the upper right hand corner (from almost any page), you’re greeted with a page of Featured Podcasts. 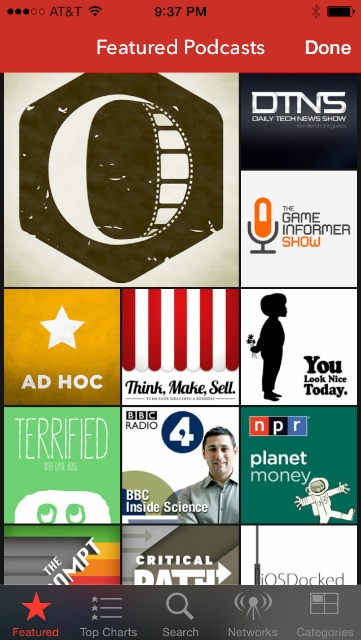 You can also see podcasts grouped by popularity, categories, and network. 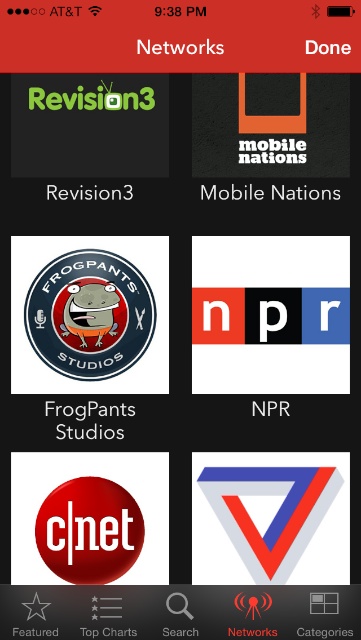 The Network view is very useful, though it’s far from complete. Earwolf and MaximumFun.org, for example, were both missing. (But their podcasts were easily found using the search tool.) 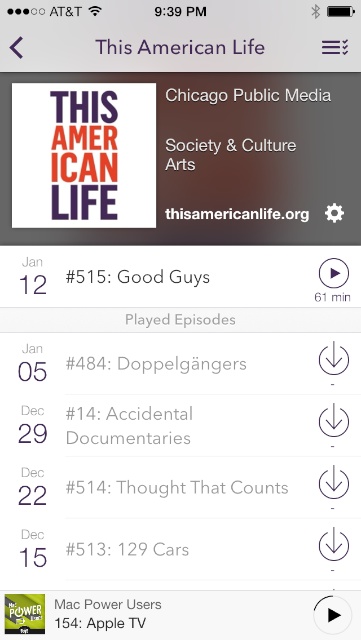 Once you’ve subscribed to a podcast, you can see all available episodes.  You can then download only the ones you want to listen to. You can also set it to auto-download new episodes in the future, if you wish. Thanks to iOS 7, downloading is done in the background, and only on wifi if you don’t have an unlimited data plan. 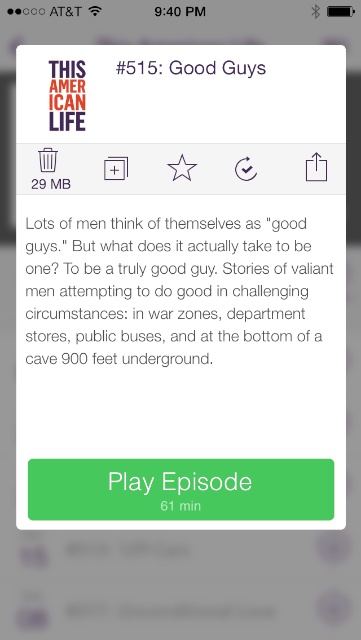 Some of the icons were unfamiliar to me. For example, I had no idea what that little checkmark meant until I clicked it. (FYI: It’s to toggle between “played” and “unplayed” status.) 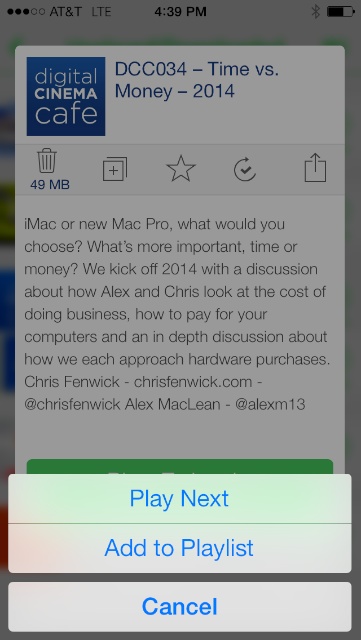 From the episode page, you can choose to start playing the episode immediately or add it to a playlist. There’s also a “PLAY NEXT” option I’ll go into detail more later. 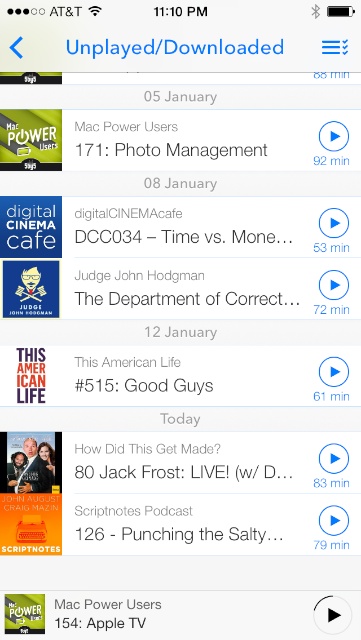 Viola. A list of just the episodes that are both unplayed and downloaded.

The app is not without its quirks.  For example, you can create a “filter” — like the one seen above — that will automatically sort your podcast library by whatever criteria you want, but it’s not the same as a playlist.  Selecting an episode in the “filter” list will only play that individual episode. It will not automatically go onto the next one in the filter.  You need to create a “playlist” to do that.  Adding episodes to a playlist is easy, but, still, it’d make more sense to just have filters and playlists be the same thing.  The reason I left the Apple Podcast app is because I didn’t want to have to manually add anything to a playlist, yet here I am, having to do just that.

But just when I was ready to give another podcast app a try (for another $3), Pocket Cast won me over.  The saving grace?  The “play next” button.  One of the reasons I hate playlists is this: Let’s say you see an episode you’d like to listen to after the current podcast you’re listening to is over.  So you add it to a playlist, where it appears at the bottom of the list, and then you have to manually move the episode up, in order to hear it next.

With the “play next” button, it’ll cut through all that.  Just hit that button and the app will automatically cue the selected podcast to start playing as soon as the current one is finished.  It’s a feature I never knew I wanted… and now it’s the main way I listen to podcasts.

Another cool thing about the app is the way it handles “chapters.” 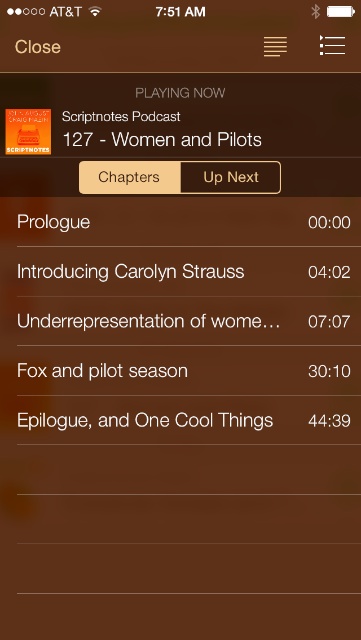 Only one podcast I listen to — Scriptnotes — uses chapter markers, but I imagine more and more podcasts will start to.

Another thing it handles quite well: Links to additional content. 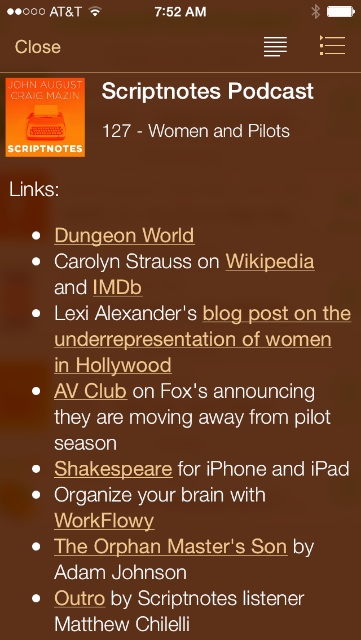 The app might not be quite what I expected (seriously, filters and playlists shouldn’t be two different things), but I’m not regretting the purchase. If the idea of super-customizable filters, a “play next” option, and an extremely user-friendly interface for finding & subscribing to new podcasts intrigues you, then I can easily recommend Pocket Casts.