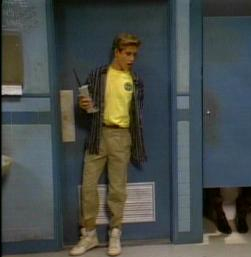 I saw this commercial again just last night.  I get that when the HTC Evo came out in June, Sprint wanted to really play up its “first” status among 4G cell phones, which was a great idea back when it was the only 4G phone.  But all Sprint’s doing now is reminding people the Evo is the oldest 4G phone out there.  Not sure that’s the message they want to be sending.

Side note: Does anyone even remember what the first 3G or 2G phones were? Nope. I don’t, and I actually pay attention to these things. The commercial pretends like being the first 4G phone is as iconic and groundbreaking as being the first rotary phone or the first rocket into space, but as far as I can tell, only three cell phones have officially reached icon status:  the first iPhone, the Motorola Razr, and Zack Morris’s grey brick mobile phone.  That’s it.