The Panasonics and Olympus were the first to be eliminated. Easily. They got great write-ups, have nice form-factors, and can shoot great looking video (with a lot of know-how), but they aren’t for me.  They have the same sized sensor as my Olympus E-420.  Though I can use my current lenses with the new Olympus camera (and the Panasonic, too, with an adapter), my current lenses aren’t that great.  I’m more than happy to buy new ones.  Lenses and software are upgradeable, but the image sensor is the one thing I’ll be stuck with for years to come. I can’t spend another 4-5 years with an image sensor of this size.

The Sony NEX-6 and A57 both have larger APS-C sized sensors, a definite step-up from my current camera.  The beauty of the NEX-6 is its svelt profile.  The strength of the A57 is its speed — able to take up to 10 photos to per second, which is twice as many as other cameras in its class.  Sony is able to achieve these feats because of how they treat the mirrors in their cameras.  The A57 uses a fixed, translucent mirror technology that speeds up focusing and shooting (whereas its competitors use moving mirrors).  There is one tiny trade-off, though.  Unlike a mirror that moves out of place, the translucent mirror traps some light that would otherwise reach the sensor.  It’s not much, but it could be enough to affect low-light photography.  The NEX-6, on the other hand, has no mirror whatsoever.  But it has far too many other trade-offs to be useful as a primary video camera.

Next up was the Canon T4i. This was a SERIOUS contender.  I love the size of it. Not too big, not too small. The articulated touch screen is the future of the product line (and something found on no other Canon, not even the more expensive ones).  The downside — its optics are more-or-less the same as used in the Rebel line for the last four years. That was enough to give me pause, to get me to consider something a little more future-proof.

So that took me into the realm of full frame sensors.  If I could get one for the right price, that would be ideal.  In terms of future-proofing, the bigger the sensor, the longer you’ll be happy with it.  It’s as simple as that.  My prediction: In 4 years, you’re going to see a lot more cameras designed for consumers with full frame sensors, but cameras with even bigger sensors will still be considered just for pros. 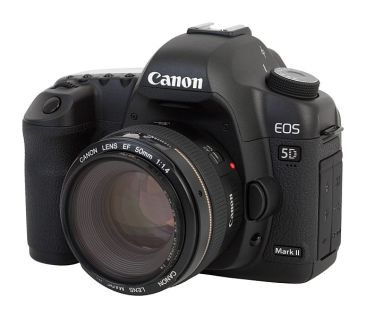 The full frame Canon EOS 5D Mark II is the camera that started the DSLR video revolution.  Whole TV episodes have been shot with it.  The camera was first announced in 2008, making it ancient by technological standards, but that just means it can be gotten for a fraction of its original price, and the image quality is no worse than it was back then.  If you’re going full frame on a budget, this is a definite consideration.  But it’s not for me.  There are just too many other — and newer — options for not that much more.

Those newest full-frames are the Canon EOS 6D and the Nikon D600.  The Canon 6D has gotten a bad wrap in my book.  It’s designed to replace the aging 5d Mark II, and in that respect it bests the 5D Mark II in every category at a price lower than the 5D Mark II’s when it was first released.  But people keep comparing it to the Nikon D600, which wins on the feature-list, and were quick to declare the 6D a loser before it even reached store shelves.  The Nikon D600 includes a built-in flash, more auto-focus points, and a headphone jack, among other things that seem a lot more practical than the 6D’s exclusive new features: built-in GPS and WiFi.  Canon enthusiasts counter that built-in flashes really aren’t that useful on a full frame camera, the Nikon’s many auto-focus points are too clumped together (i.e. they don’t really cover more area than the 6D), and if you’re shooting video you shouldn’t be using the camera’s headphone jack anyway (you should be recording sound separately for optimum quality).  Nikon enthusiasts counter that it’s better to have those options than not, and that GPS and WiFi are things they still get extra if they really want them.

I read dozens of reviews of both cameras and watched every side-by-side comparison I could find to parse through the brand biases.  And you know what?  The Canon actually won me over.  I would use the GPS and WiFi. I hate using built-in flashes.  Yeah, I might miss the headphone jack when I’m “run-and-gun” shooting, but for this next film project of mine I’m using dedicated sound equipment.  Also: The Canon 6D got the edge in low-light performance, which if you read Part 1 of this series, you’d know that’s very important to me.

The internet response to the Canon 6D reminds me of the initial response to the Canon 5D Mark III when it was announced a little under a year ago.  Many quickly dismissed the Mark III as overpriced and not delivering enough new features to pry them away from their Mark II’s.  Eleven months later, though, the Mark III has firmly taken its place as THE full frame camera to beat, especially for video.  I have a feeling that by the 6D’s first anniversary, it will have a nice reputation as a great 2nd camera for pros and a terrific first camera for full frame amateurs.  Why?  Because the people who actually use it (and not just study spec sheets) seem to really, really like it.

So as of a couple weeks ago, I was set on purchasing the 6D.  That was the camera for me.  But there was just one thing holding me back.  All the cameras I’ve talked about produce excellent video in well-lit circumstances.  And some of them, like the 6D, still take highly usable video even with much less light.  But they all have the same drawback:  Moiré.

To me, moiré is to video what feedback is to audio.  It can be very distracting and gives off an air of cheapness.  Most professional videographers, regardless of the camera they’re using, simply avoid shooting certain backgrounds or clothing patterns just to insure they don’t get any moiré (or it’s non-French sibling aliasing).  For example, the Canon 5D Mark II definitely isn’t immune from moiré, but that didn’t stop many pros from using it.  They simply avoided filming patterns that have a tendency to produce the effect.  (In fact, because television sets can produce moiré on their own even when the image is recorded perfectly, most TV cinematographers always avoid filming moiré-ish backgrounds and clothing, regardless of how good their equipment is.)

The Canon 6D and Nikon D600 are no worse at moiré than the 5D Mark II.  But I guess the fact they hadn’t eliminated the issue completely disappointed a lot of people.  Particularly because the 5D Mark III, which came out before both those cameras, seemed to conquer it. By all accounts, the Canon 5D Mark III is the first (mostly) moire-free DSLR and still the only full frame camera that can make the claim.  In other words, if you’re shooting a lot of brick buildings with shingle roofs near power lines, there’s only one camera for you.

I’m not a pro, but I’m definitely in the “avoid moiré as best you can” boat.   Unlike the pros, though, I won’t have the luxury to location scout or select ideal wardrobe for most of my projects.  I want a film-look for my short, but as soon as you see moire, your first thought is “oh, this was shot on video.”

For this reason, I held off on getting the Canon 6D on the off chance I could buy a used or refurbished Canon 5D Mark III. A full price 5D Mark III was definitely out of the question, though.  As important as the moire issue was to me, it wasn’t worth paying full price to address it.

(Note: I didn’t even consider the Nikon D800, as it’s roughly the same price as the 5D Mark III, but still marred by some of the same image issues as the less expensive full frames).

Sadly, its definitely a seller’s market for Mark IIIs, with buyers having to shell out almost full price even for used ones (granted, they can still save on sales tax, but it’s still a steep price to pay to get into the moire-free club).

Side note: Around this same time, I tried to see how much I could get for my old Olympus E-420.  Samy’s Cameras here in LA, which has a large used department, wouldn’t take it.  I thought about Craigslist and eBay, but I hate selling things online.  Too many bad experiences.  I turned to B & H Photo in NYC.   They gave me a quote on the internet and emailed me a free shipping label.  So I shipped them the camera, hoping they’d find no fault with it,and give me the the $230 they said it was still worth.  I opted for Store Credit because I figured the turnaround would be faster than a check.

By this point, I’d already been to Bel Air Camera, and they told me they’d match any prices I could find from reputable online dealers.  Though I’d have to pay sales tax, I wouldn’t have to pay for expedited shipping to get the camera in a timely manner.  I was ready to buy the camera from them, as I’d about given up on finding a refurbished 5D Mark III.

That’s when I got an email from B & H saying they inspected my camera and were issuing a store credit for the whole amount quoted.  It was redeemable immediately.  On a whim, I searched for a refurbished Canon 5D Mark III one more time on the B & H site.  And this time… They had one!  Between the store credit, the lack of sales tax, and the refurbished designation, it was actually only slightly more than the Canon 6D brand new in Los Angeles. So I bought it right then, as I knew it wouldn’t last long. (I had seen only one before, and it didn’t last an evening on their website).

And yesterday it was delivered.  The 5D Mark III a lot to take in — not only is it my first full frame DSLR, but it’s also my first Canon DSLR, which has a learning curve of its own — but I can honestly say I got my “no compromise” camera at the price of the compromised ones.  I’m happy. My wife is happy that I’m happy. All is right in the world.