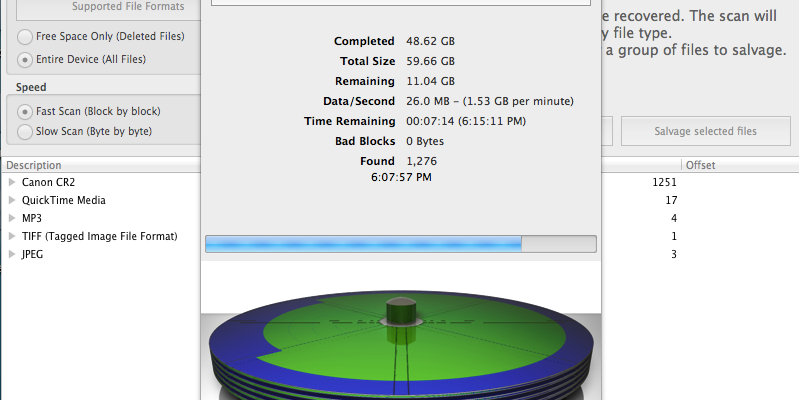 A little over two months ago, my newborn daughter took her first breaths, and I was there with my new camera.  I documented her first day like Errol Morris on crack.  First bath? Check. First snuggle with mom? Check. First poop? Check. For two days, while we were all stored up at the hospital, I snapped away.  Then came time to take a look at what I got…

Nothing. The computer told me that the memory card was empty.

Back in the camera, though, the SD card showed all my photos and video were present.  So everything was there… it’s just that none of it was readable to the computer.  Curious, I put the memory card back into my Macbook Air’s SD slot.  I loaded up Disk Utility, Apple’s handy diagnostic/repair tool for storage devices.  Sure enough, Disk Utility found an error on the SD card.  I hit the “repair” button and, boom, the SD card was “fixed.”  No more errors.

But no more pictures either.

Whatever Disk Utility did to “fix” the memory card wound up making it appear empty to both the laptop and the camera now, too.  Oops.

“That’s okay, it’s just all the video and photo I took from the first two days of my daughter’s life, I’m sure I’ll have another chance to capture those same exact memories” is not what I said.  I was pissed.  Of all the pictures I’d ever take with this camera, those were the most unreproducible.

So I scoured the internet for an application that could retrieve deleted files.  This is where you have to be careful.  In all truthfulness, if you have good online habits, you can avoid viruses and spyware with 99% certainty without the need for any anti-virus software.  Downloading programs off the internet, though, is not a good online habit.  Malware, like vampires, typically can’t enter your computer unless it’s invited.  The most harmless (and seemingly useful) application could really be a nasty trojan horse.  You have to be careful to whom you open your door.

Even though I’m a tech guy, I’ve don’t have much data recovery experience. I’m such a devout believer in backing up, I’ve never really lost a file before. A Google search turned up a lot of programs, but I didn’t know which companies were trustworthy.  Before you download any software you intend to run on your computer, always look into the company.  Look for reviews from as many reputable sources that you can.

One of the programs I came across is called FileSalvage.  It claimed to be able to recover image and video file formats specific to my Canon camera, so it immediately rose to the top of the list of programs I wanted to try.  I then set out to find some reviews.  Various user forums had people both praising and complaining about the product — but the complaints were limited to people who didn’t think it worked for their needs or hated the speed/interface.  No one complained of malware.  And I even found a couple positive legit reviews of it.  It didn’t matter if the reviews were from several years ago — it’s actually a good sign if a program has been around for a while and is continually updated.

So I downloaded FileSalvage from their main website (always get it from the source) and installed it, fingers crossed.  The free demo mode is limited to just telling you it found a lot of files and not much more than that. You definitely can’t recover anything for free. But that’s par for the course with a lot of programs.  Just enough free functionality to peak your interest, and that’s it.

When you run data recovery programs on a storage device, the software will scan for anything it can find, even files you intentionally deleted a long time ago.  The free preview found A LOT of files on the SD card… but I had no way of knowing for sure whether it found my most recent pics and video.  At this point, though, I had nothing to lose besides $80, so I bought a user license and unlocked the “recovery features” of the program.

FileSalvage can’t tell you anything about the files you’re recovering other than “file type” and “size.”  That’s all the info you get before you start recovering.  No metadata of any kind, not even original file names.  At this point, there’s a bit of wishing and hoping that that the files I wanted were among the thousand it found.  I went ahead and recovered all of them.

Note:  The way digital storage works, files are never truly deleted.  When you delete a file or do a routine format of a hard drive, the file structure is merely changed to allow new files to be rewritten over old ones.  The less you use a memory card (or hard drive, flash drive, etc), the more likely you can recover deleted missing files. (Because of this fact, it’s unwise to restore recovered files to the same drive you’re restoring from.)  If you’re ever giving away a computer and want all your old data as hard to recover as possible, do a specialized format that overwrites old data as it formats.

So what was the verdict on FileSalvage?  After going through all the recovered files, I got all the videos and pictures back that went missing.  Yay.  Well worth the $80 even if I never use this program again.

One thought on “Nothing’s Lost Forever: Data Recovery For When You Need It Most”