In my last post, I talked about how I returned a Pebble Smartwatch because of its deficiencies as an “always-on” fitness tracking device (otherwise, it performed as promised).  I had my eye on the Fitbit Force

— and was just about to purchase one — when I saw a friend tweet this:

Bought a @fitbit for Xmas and now have had not one but TWO just stop working… Very disappointing! Feeling very unfit.

That was enough to give me pause.  I considered switching to the UP 24 by Jawbone

The first thing you notice once you open the package is how striking it is — like a flying saucer from Planet Gucci.  The Shine is available in a variety of colors – Jet Black

, Grey, Topaz, and Champagne.  It comes with a magnetic clasp that allows you to clip it to your clothing, but there are also optional watchbands and even a necklace accessory.  Misfit seems to think you won’t mind wearing it visibly to dressy workplaces and/or fancy social gatherings and you know what? They may be right.

The second thing that stood out to me about the Shine: It’s not rechargeable.  It comes with a conventional watch battery (i.e. the thin, round kind) that is supposed to power the device for at least 4 months before you have to replacement it. This is all part of the Shine’s “never take it off” ethos. Because it’s both waterproof and doesn’t need recharging, you’re supposed to sleep with it on, shower with it on, and according to the packaging “make sweet love” with it on. (Okay, I made that last part up, but you could.)

There are twelve lights around the diameter of the Shine, each representing a step towards your daily activity goal (which is customizable, of course).  The lights can also be used to tell time, with a solid light indicating the hour and a flashing light indicating the nearest minute.  It’s not minute accurate, but that’s on par with most hyper-stylized watches (i.e. those without any numbers). Activating the lights to see either the time or your daily progress (or both) is as simple as tapping it twice.

Initial set-up is ridiculously easy. It works via bluetooth, but you don’t even have to open the bluetooth settings on your phone.  The first time you open the app, a circle appears. You just place the Shine in the circle and tap. That’s it.  All bluetooth synchronizations should be this simple.

Whenever you open the app, the first thing it’ll do is look for the Shine to sync up its data. The app can even sync up with the Shine on its own periodically throughout the day.

The data itself is minimal, but still useful. The home screen shows you your daily progress: 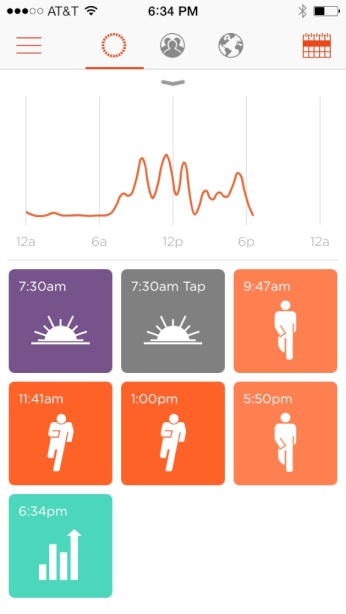 And tapping on the badges reveals more detailed info about the activity in question: 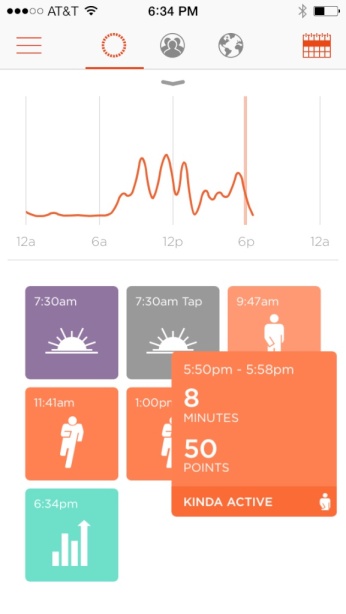 I found the sleep tracking to be pretty accurate:

There is no altimeter to measure elevation nor does it tie into the GPS info on your phone to track distance. But for $80 (+$20 for the watch band), I’m not complaining.  The idea behind the misfit is to measure your overall activity for the day. If you’re a hard core runner or biker and want something with more bells & whistles, this isn’t for you. This is for those of us who just need a little extra encouragement to be more active throughout the day.

Other things worth mentioning:

– It does have social networking features allowing you to compare your activity to others.

– It’s completely waterproof, even when swimming, something the FitBit Force lacks.

– It’s smaller than it appears on the box.  Just something to keep in mind if you think you might want to wear it as a watch. The guy on the package has pretty small wrists.

– It doesn’t claim to track steps, which I think is a good thing, since that’s nearly impossible to do accurately. It instead awards you points for movement. The more intense the movement, the more points awarded.

– If there’s a specific activity you do a lot — run, swim, play soccer, etc. — you can set it so that a “triple tap” lets it know that’s what your doing, and it’ll take that specific activity into consideration when gauging your movement.

– It’s so small, you can just stick it in your pocket and leave it there all day.  No need to use the included clasp (or buy a watchband) at all.