I’ve been using Pocket Casts as my main podcast-listening app since the beginning of the year. (You can read my original review here.) The main advantage Pocket Casts has over Apple’s own podcast app?  Greater ability to organize podcasts.  For example, I like having a listview of only podcast episodes that have been both downloaded (i.e. not-to-be-streamed) and are unplayed.  Pocket Cast can do that.  Apple’s podcasting app can’t. 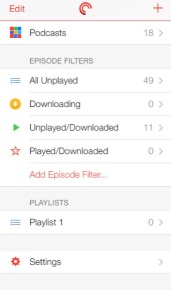 Pocket Casts does have one annoying quirk, though. The app’s filters are a great way to view your preferred podcasts, but they lack “continuous play” (i.e. when one podcast ends, the next one on the list automatically begins).  To get that, you have to manually add episodes to a separate playlist.  It would be better if filters and playlists were the same thing.

(Note: The app does offer a couple other ways to “build a queue,” but none of them are ideal solutions.)

This might not seem like a big deal, but I hate it when I’m driving and the podcast I’m listening to ends, only to be followed by dead silence.  The last thing I want to do while behind the wheel of a car is mess with my iPhone.  It might not happen often since the average podcast is about an hour long, but it happens enough that I figured it’s time to give another app a chance.

That app:  Downcast.  Let’s take a look at how it compares to Pocket Casts.

Downcast must be my new default podcast player, right?  Not so fast.  Let’s look at them side-by-side.

These are screenshots of player windows for both Pocket Casts and Downcast.  The same exact info & features are present in both apps, just presented differently.  Pocket Casts hides almost everything behind icons.  Downcasts lays it all out there.

Finding podcasts to subscribe to is much more visual on Pocket Casts.  On Downcast, the same functionality is there, but it’s all text-based.  Podcast also has the nifty ability to search via “Podcast Network,” although many notable networks are still missing.

Pocket Cast might be winning the interface comparison (if simplicity and elegance are your things), but Downcast’s bread-and-butter is ultimate customizability, and the app does not disappoint.  Check out how much longer Downcast’s settings window is.

Downcast is feature-rich, but a bit unwieldy. Pocket Cast is much more visual and much more stream-lined.  Where Pocket Cast feels clean and modern, Downcast feels dated and cumbersome.

I’ve made the switch to Downcast, but only because I spent so much time setting it up, I’m somewhat vested in it.  I suspect within a few months, I’ll move onto something else — either back to Pocket Cast if they ever address their filter/playlist duality, back to Apple’s Podcast app if they ever make their playlists smarter, or onto a new app entirely.  If Downcast wants to keep me using it — and recommending it to others — they’ll need to overhaul the user interface considerably.  In the meantime, I can only recommend it to veteran podcast listeners looking for function over form.

As a parting gift, here are some other screenshots from Downcast highlighting aspects not mention above: 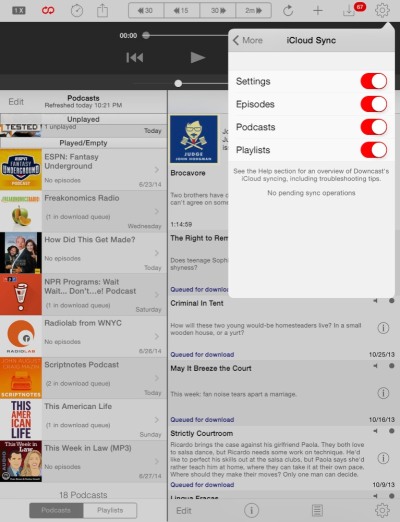 This is what Downcast looks like on an iPad. The extra space helps ease the congestion of the iPhone app… a bit. Note the iCould Sync pop-up window. Both apps allow you to sync data between different devices. Downcast uses iCloud. Pocket Cast requires you to register a separate email address & password with them. 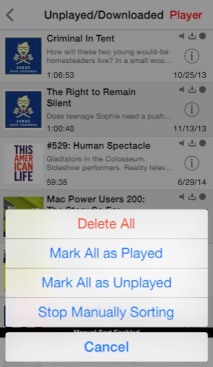 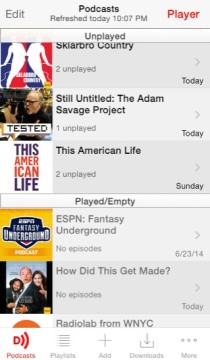 This is what the podcast list page looks like on Downcast. It automatically moves subscriptions with no new episodes to the bottom of the page. (Not sure how I feel about that yet.) 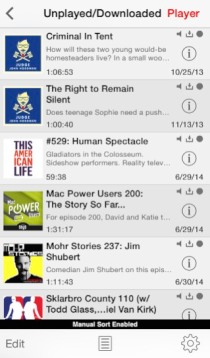 Want to customize your playlist? Downcast offers every option imaginable.

9 thoughts on “Pocket Casts vs. Downcasts: Which is the superior podcast app?”